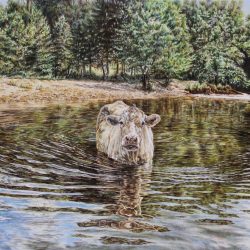 Jeanne grew up in California, riding her horse in the Castro Valley foothills, and later lived much of her life in the Midwest, and more recently settled in the Northwest. Jeanne has a Bachelors in Biological/Wildlife Illustration and much of her earlier illustration career was centered in the medical and scientific realms. Jeanne worked as a private contractor illustrating for the USDA, national magazines (Mother Earth News, Fins and Feathers, National Wildlife), and for various scientific, medical, university, and commercial communities. Since moving to the Northwest in 2000, Jeanne has also worked as a registered nurse in Oncology and Palliative Care.
Jeanne’s training as a biological/medical illustrator, attention to detail, strong connection with the natural world, and love of and lifetime experience with horses translate into her work as an artist. Over the years Jeanne has produced and exhibited award winning original equine, animal, and Western Art pieces. While Jeanne initially worked in acrylics, inks, and watercolor, it was graphite and colored pencils that allowed her to combine her love of highly realistic, detailed, texture rich compositions with her background in biological illustration. Horses and her love of nature and wildlife have been her inspiration and remain a strong theme in her beautifully detailed, expressive images. Jeanne has owned and worked with horses all of her life and they are likely, her most favored animal subject. She strives to get the details, anatomy, conformation, and movements of her subjects correct. Once she has her subject(s) in mind, the composition and storytelling of the piece come together in a way that supports the work’s harmony she captures. Many of her subjects come ‘out of the frame’ or extend the borders of the artwork. She has utilized this style of presenting a subject lending to a composition with a unique focus of interest and sense of movement, or activity.

Jeanne is an Associate, Women Artists of the West and American Academy of Equine Art, and a member of the Colored Pencil Society of America (CPSA) and CPSA local Chapter 201, and Oregon City’s, Three Rivers Art Guild.

Open Your Free Online Gallery
on TRAG Website
Have a gallery already and need to make changes? Here is how.

Not a member yet? Join now!