It has come to TRAG’s attention that there is no code in place to allow for the installation of murals in Oregon City. Although they were allowed in the past, the code has since been changed to coincide with the rules and regulations of signs. As a result, because the allowable sign dimensions are so restrictive, a large mural is no longer permitted.

We believe it is in the best interest of Oregon City to revise the current code, and once again allow murals to be installed. The aesthetics of murals within a City can greatly enhance a City’s character. Moreover, they can create an atmosphere that is conducive to tourism and commerce – and ultimately a thriving economy. Silverton, Estacada, and The Dalles are all relatively smaller towns. However, they are famous for their murals. As a result, they use these beautiful artistic creations in their marketing and advertising to build a stronger economy for their merchants.

We are asking for your support to change the code and once again allow murals in Oregon City. We want to make it clear that we are NOT asking for financial support. There are a multitude of grants available to fund this kind of project once they are permitted. What we do need from you is your voice and patronage. If you would like to support this exciting initiative, you can fill out the short form below that follows a letter of support.

The letters will be collected by TRAG and submitted to the City Commissioners to show our community’s support for murals in Oregon City. We will then follow up at a City Commission meeting with a short presentation and hopefully a vote of confidence to start the code change. There is strength in numbers and being able to voice our vision of a more beautiful Oregon City to those in charge can bring it to fruition.

Art changes who we are as human beings. It can transform a life, a community, a culture. Let’s work together to bring back the allowance of murals in Oregon City.

The Three Rivers Artist Guild was asked to participate in the Portland Rose Festival Porch Parade. Rather than the public going to the rose festival parade in these times of isolation, the public can take a drive and see over 300 porches decorated in honor of the rose festival!These three pieces are installed at 2818 NE 10th St in Portland. Thank you Lucas Nickerson for the oxen, Susan Woodworth for the covered wagon, and Trieste Andrews for the Winged goddess. Go to paradinginplace.com for more info and a map! The porches will be decorated from May 16 to May 30. 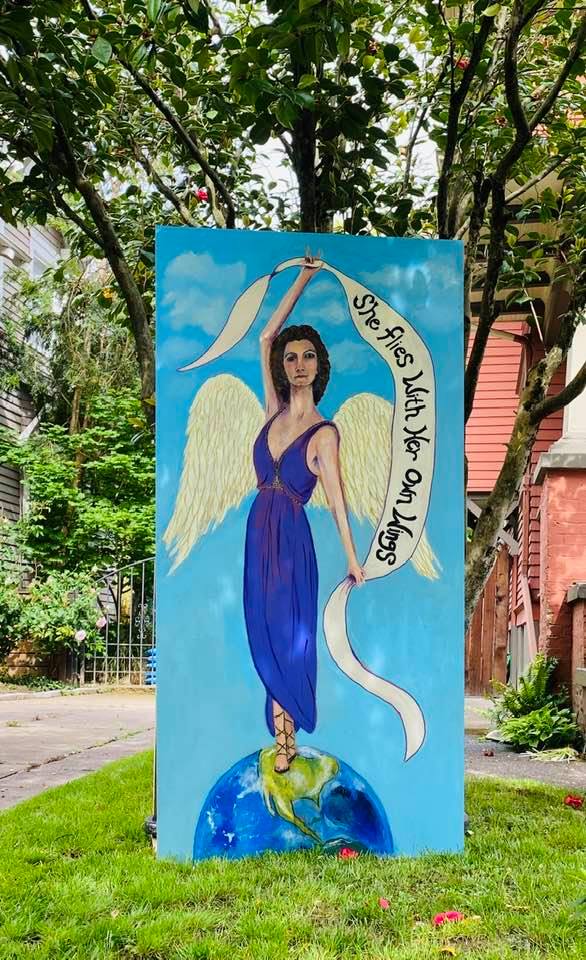